On a visit to Lake Annecy in France, we had the pleasure of experiencing this fantastic situated Restaurant and hotel on the edge of Lake Annecy, not too far from the Swiss border in France.

The trip was a part of a culinary tour through Europe, we visited Stucky Restaurant in Basel, Les Frere Troigros in Illhäusern, Elsass, Fredy Girardet in Crissier, and last but not least Auberge du Père Bise. We meet up with an American couple, that frequented our restaurant in Fort Lauderdale a lot, at Auberge du Père Bise and experienced a fantastic breakfast on the terrace by the lake. The food was unforgettable. 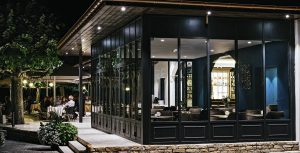 The Inn story – a family abode

The inn was set up by Marie and Francois called “le Père” Bise in 1903. It initially was a cottage on the lakefront where one could enjoy a simple meal, that Marie would lovingly concoct. Success quickly followed and in 1928 their son Marius implemented the first extension works. The cottage then becomes a beautiful hotel that welcomed celebrities of the era. His wife, Marguerite, was an amazing chef and created masterpieces that made her part of the French gourmet heritage. In 1951, the Michelin guide awarded her the third star. Their son François, and his wife Charlyne took over, with the same emphasis on excellence. Their daughter Sophie was next in line. The Bise family had always wanted to offer the highest possible quality to their guests, with an outstanding setting and an elegant ambiance. In 2007, the hotel was extensively renovated to bring in modern comforts into the rooms and suites.

In 2017, Magali and Jean Sulpice start a new chapter to carry the beautiful story forward. They put in a lot of renovation efforts to bring even more comfort to the beautiful abode. They wish to preserve the true essence of a family abode where it is possible to experience extraordinary instants like plain emotion, with a sense of hospitality, sharing, and the generosity that makes up the soul of this inn. 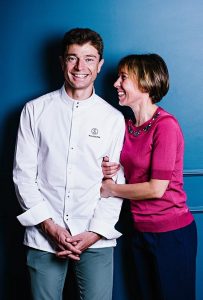 JEAN SULPICE’S CUISINE IS IN TUNE WITH HIS SELF-DETERMINING AND GENUINE PORTRAIT, ANCHORED WITHIN THE SAVOY REGION AND FILLED WITH THE RICHES OF THE MOUNTAINS. HIS TASTY CREATIONS RELATE TO HIS LOVE FOR NATURE AND WIDE-OPEN SPACES. A PURE, BOLD, AND DEEP-ROOTED CUISINE.

The restaurant – a deep-rooted cuisine

Jean Sulpice maintains an intense relationship with the natural elements that surround him. He immerses himself and unwinds in that environment, exploring them by foot or on his bike: he lives at their pace, according to the seasons. This deep bond harmonizes his existence, both as a chef and as a man. And his cuisine is the purest expression of that bond.

In this Savoyard territory that reaches out to the Italian Piedmont, the Alpine terroirs have retained their power of fascination: lakes, pastures, mountains faithfully liven Jean Sulpice’s cuisine. From them, he draws his inspiration as well as the freedom to craft dishes comprised of frank savors and built around original flavor combinations. Working with the seasons, careful selection of ingredients from the vicinity, and subtle variations around wild herbs are what define forthright and sincere creations, working as closely as possible to these products’ most natural and sublimated expression.

The gastronomic restaurant – 2 Michelin stars and 18.5/20 in the Gault et Millau guide – provides a warm-hearted setting to Jean Sulpice’s cuisine that perfectly matches the raw, natural environment of the Auberge du Père Bise. The restaurant’s colors borrow from the lake’s turquoise and cerulean waters; from the main room or the terrace on sunny days, the panoramic view draws the eye from the shores of Talloires Bay to the heights of the Semnoz.

The menus of the Restaurant

This site uses Akismet to reduce spam. Learn how your comment data is processed.